With this status, Vicar Hope Foundation can have observers and representatives at the United Nations General Assembly, the UN ECOSOC, the Human Rights Council and public meetings of other United Nations intergovernmental bodies.

The conferment of the special consultative status is contained in a letter addressed to Vicar Hope Foundation from the United Nations and signed by Marc-André Dorel, Acting Chief, NGO Branch Office of Intergovernmental Support and Coordination for Sustainable Development Department of Economic and Social Affairs. 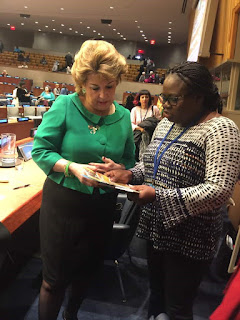 According to the United Nations, organizations in general and special consultative status like Vicar Hope Foundation are able to submit written statements relevant to the work of the Council on subjects in which these organizations have a special competence.

Reacting to the development, the founder of Vicar Hope Foundation, Mrs. Nkechi Ikpeazu said the recognition will give greater impetus to the Foundation’s work on women empowerment.

She said the Consultative Status will increase opportunities for greater collaborations with local and foreign NGOs and increase the capacity of Vicar Hope Foundation to deliver on its mandate beyond the shores of Nigeria.

Chika Ojiegbe,
Chief Press Secretary to the Wife of the Governor.

4 Great Marketing Insights That Will Generate Much Money For You

How Not To Loose All Funds During Lockdown

Rose Uduma - February 19, 2020
0
Today, 67% of shoppers say that their level of good experience is higher than ever, making their customer experience more competitive than...

How To Use Your Blog As A Content Marketing Tool For...

Nigerian Stock Exchange Set To Use Blockchain As New Technology For...

4 Reasons Why Your Event Sponsorship Will Fail